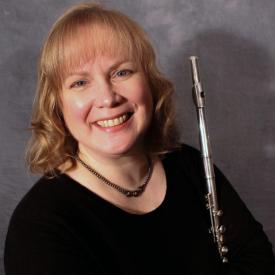 Shari Shaw received her Bachelor of Music Education degree from Stetson University, where she studied with Dr. Jean West. Her other teachers include Shelley Warren, Lea Kibler, and Jane Clare. She has been a private flute and piccolo teacher for 30 years.

A native Floridian, Shari played with various chamber groups, and for many musicals and events in the Daytona Beach area. She was also a soloist at the National Flute Convention in Washington DC. Her students have been accepted to District and All-State bands, have received superior marks at Solo and Ensemble Festivals, and have become successful college students.

She now enjoys freelancing in the New Hampshire and Northern Massachusetts area, performing with the New England Flute Orchestra, teaching flute and piccolo privately, and working as a substitute teacher in the Amherst, Milford and Merrimack School Districts. 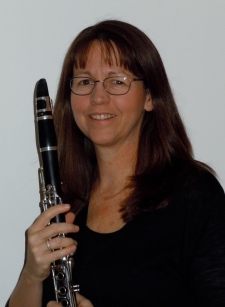 Donna is currently the director of the Nelson Town Band, the founder and director of the Monadnock New Horizons Band and a local private teacher and free lance musician. She is also the lead sax player in the Keene Jazz Orchestra, a clarinet player in the Keene Chamber Orchestra and the keyboard/background vocalist in the local band The Nines. She plays clarinet, saxophones, flute, piccolo, and piano.

Donna is from a very musical family and her music education began in Miami more than thirty years ago with piano lessons.  She started clarinet in 6th grade, and played in band throughout college. She loves playing clarinet and was able to play in Florida All-state festivals, district festivals, and four years in the Orange Bowl parade.

After college, Donna expanded her woodwind playing to flute and saxophone, studying flute with Shirley Gilpin, formerly of the Charlotte Symphony Orchestra and Julie Armstrong of the Keene Chamber Orchestra and studying saxophone and applied jazz harmony with Scott Mullett and Mark Pinto of Boston. She has been in the Keene Jazz Orchestra since 2003 and has performed with Boston’s White Heat Orchestra, Bob Cuniff Orchestra, the Temptations, and the Les DeMerle Big Band on a Caribbean cruise as well as many private gigs in the area. Currently, Donna studies jazz piano and harmony with Eugene Uman of the Vermont Jazz Center.

Donna loves to teach private lessons to students of all ages. She has numerous students in the Keene, NH area, at Milford High School, at Bellows Falls Union High School  and in Pepperell, MA. Many of her students have auditioned and have been accepted for NH All-state, NH Jazz All-State, NH Honors Band, and the MA Central District Music Festival.

Donna and her husband, Dave reside in Keene, NH. 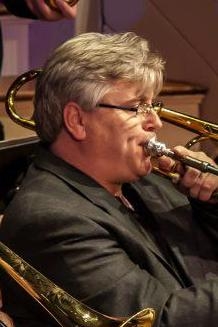 Eric Schedin studied music and received his BS in Music Education from the University of Massachusetts at Amherst. He earned the “Chancellors award for excellence” and was named to the “Epcot All-American Marching Band”.  As an UMass student, Eric played principal trombone in the Wind Ensemble, Symphonic Band, Brass Choir and lead trombone in the Jazz Ensemble I. He also marched in the Minuteman Band for four years, performing the duties of section leader, rank leader, field staff coordinator and featured soloist. Marching led him to Concord CA where he marched and was a soloist with the world champion Blue Devils Drum and Bugle Corps.

As an public school educator, Eric has taught grades 5 through 12 classes in band, marching band, concert band, jazz ensemble, jazz improvisation, music theory and composition. His high school concert bands and jazz ensembles have repeatedly received the highest awards at Massachusetts state festivals.  He has taken the podium to conduct his ensembles at Symphony Hall in Boston, Seji Ozawa Hall at Tanglewood and the Hatch Shell on the Esplanade. He has been called upon as a guest artist and clinician in many middle and high schools in New England.

A versatile musician, Eric performs a wide range of musical styles with a varied group of artists. A sample of his playing experiences are, commercial with the Temptations and O’Jays,  jazz improvisation with many small jazz groups, big band lead with Jeff Holmes and the Worcester Jazz Orchestra, principal orchestral playing with the Santa Rosa Symphony Orchestra and the Thayer Symphony O, and brass quintet with San Joaquin Brass and Quintessence. Eric has played in Moscow, St. Petersburg and Petrosavadsk in Russia, Osaka, Japan and more than half of the Unites States.

I was 14 years old. I was on stage with Horns Become Halos for our album release show, and I can so vividly remember the intoxicating experience of hearing the lyrics to songs we wrote being screamed back at us from the darkness of the sold out hall. This night is, without a doubt, the single most important experience I have to look back on as a musician. It not only serves as a reminder of how wonderfully fulfilling the experience of making music can be, but it sets the bar for the specific feeling I hope to pass on to everyone who chooses to make music with me.

Chasing this wonderful experience defined my career path. It pushed me to get a degree in music and to try my hand at every musical situation I possibly could in a never-ending search for new challenges and inspirations. It’s taken me to many different parts of the country and the world abroad; into the biggest sold out theaters alongside the most intimate jazz clubs. I put my all into everything that I do, and approach every project I engage in from the perspective of the listener, focusing on making creative choices that suit the music, above all else.

Katrina Feraco is a mezzo-soprano with a B.A. in music from Keene State College where she studied voice with Dr. Daniel Carberg, with a special focus on music education. She’s performed as a soloist and with ensembles both domestically and internationally, most recently in Einbeck, Germany through the Keene-Einbeck Partner City Commission (2017) and in New Brunswick, Canada at the St. Andrews Arts and Music Festival (2016 and 2018). She’s performed with the Keene State Chamber Singers under the direction of Dr. Sandra Howard; Keene State Concert Choir, where she student directed under the guidance of Diane Cushing; the Keene Vocal Consort, which specializes in early music, under the direction of Drs. Daniel Carberg and Matthew Leese; and the Monadnock Chorus under the direction of Dr. Matthew Leese. Both as a student and as an alum of Keene State, she was involved heavily with the Keene State Opera Workshop and has performed with Keene-based opera company Raylynmor Opera. Since graduation in 2017, she’s served as music director for the Riverbend Youth Company (Junie B. Jones, Jr; Peter and the Starcatcher) and has been performing as a soloist throughout the Monadnock Region and Souhegan Valley. She also freelances as a music critic for Goodnight Magazine.